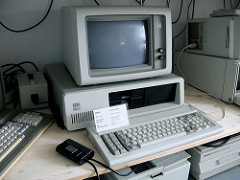 We truly live in an online social world! August 12, 2011 marks the 30th anniversary of the debut of the IBM Personal Computer at the Waldorf Astoria Hotel in New York City. To recognize the special date, both IBM and Microsoft turned to the social web. Specifically, they blogged about it.In a post on IBM's A Smarter Planet Blog, Mark Dean, IBM Chief Technology Officer Middle East and Africa (who was one of the engineers who designed that first PC - the IBM 5150 personal computer shown above) revealed that his primary device these days is a tablet, not a PC! He wrote the following:

"While PCs will continue to be much-used devices, they’re no longer at the leading edge of computing. They’re going the way of the vacuum tube, typewriter, vinyl records, CRT and incandescent light bulbs. PCs are being replaced at the center of computing not by another type of device—though there’s plenty of excitement about smart phones and tablets—but by new ideas about the role that computing can play in progress. These days, it’s becoming clear that innovation flourishes best not on devices but in the social spaces between them, where people and ideas meet and interact. It is there that computing can have the most powerful impact on economy, society and people’s lives."

On The Official Microsoft Blog, Microsoft Corporate Vice President of Corporate Communications Frank X. Shaw noted that the Apple II and other personal computers preceded the IBM 5150, but once IBM rolled out a PC running the Microsoft Disk Operating System, the dream to have a computer on every desk and in every home started to become a reality. He wrote:

It's very interesting to compare how these two companies look at the past, present, and future of the personal computer through these two senior-level employees' blog posts. Both companies have moved away from their reliance on personal computers to drive revenue. While IBM moved away from commodity businesses and now focuses on consulting services and research and design launching new chips, computers, and software. Microsoft now focuses on software, cloud services, and the web.Kudos to IBM and Microsoft for turning to their blogs to share their stories and thoughts about the 30th anniversary of the IBM 5150 personal computer. On the other hand, it's too bad both posts read more like marketing brochures filled with "here's why we're so great" language, particularly in the latter half of both posts. However, it's a step in the right direction. Hopefully, they'll delete the corporate rhetoric next time and actually provide more useful, meaningful, and interesting information that people can trust. After all, isn't that what a blog is for?Image: Marcin Wichary